I have invented spoons for aliens Though I don’t know any, at least knowingly, to test them on. Anti-vaxxers, flat earthers, climate deny-ers may all be slipping through the net of intelligent humans. However "When we're talking about aliens, we're really talking about those people around us who maybe we don't entirely understand." I started with Daleks, and to be fair, that's as far as I got! However the Curiosity rover has spotted spoons on Mars. Read on!!

My alien spoon is very similar to a spatula. I just don’t like calling them that though. Why would you use the word “spat” when it comes to food. Flatula would be better. Or not. Possibly the Norwegian “StekeSpade”.

The only aliens that I have thought much about are Daleks. A Dalek would say: “I wish I had hands. I like spoons. I don’t like humans. Exterminate.” And they’d just steal the idea.

Having given this considerable thought I am thinking that Daleks would have to feed each other because they don’t have elbows. Probably through the grill.

Curiosity wheeled past what could be an alien picnic spot on Mars recently. Check out the floating spoon and the one behind it. Actual unretouched photos, by the way. 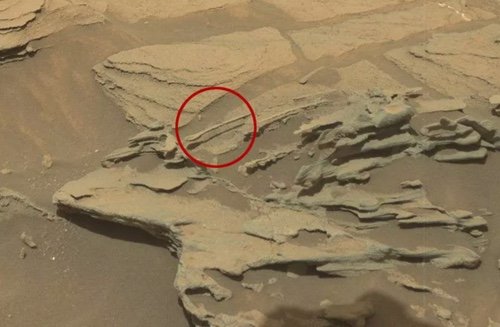 To quote more from this article at Space.com:

“If you want to share a meal with an alien, you may have to begin by broadening your definition of a meal. A lot.

That's the conclusion Christy Spackman, a social scientist, chemist and chef at the School for the Future of Innovation in Society at Arizona State University (ASU), came to when she began thinking about the role food could play in establishing diplomatic relationships with extraterrestrial beings. Her "menu" was inspired by an ASU project focused on developing communities beyond Earth.”

Many minorities use spoons. I myself am in several minorities - so people tell me. And I use spoons! They address the difficulties that we might have eating. Minority ≠ Disability. However I am old enough to be part of what you would call history - and not very “woke”, also bald and definitely a man (therefor often wrong). So if I’ve managed to offend you, and you consider that a bad thing - do say. It wasn’t intentional. Please advise. Minority Spoons May 2020